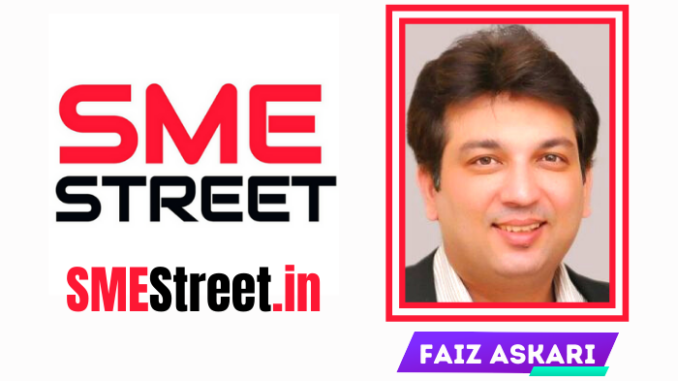 Question 1. Give a brief background about yourself and your business?

Faiz Askari: Came from a Lucknow-based family which has a literary background and completed a post-graduation degree in journalism. Started my journalism career with Hindustan Times, Lucknow edition, and came to New Delhi while getting shifted to business media with CyberMedia. In Delhi, after working with leading newspaper groups like Indian Express, I happen to work with some International media houses as well. Also got a chance to work in Dubai and understand the Middle East media sector as well. In between, I manage to diversify my focus towards small business-focused subjects. I started writing on various Entrepreneurial success stories, issues related to MSMEs (Micro, Small, and Medium Enterprises), and Startups.

In between, I also worked on the corporate side leading their SME side of Business communications.

Question 2. What was the objective and vision to start your media business?

Faiz Askari: The main objective came from market observations. There was a need to establish a strong voice of entrepreneurs and a platform that can highlight MSME-specific success stories and connect them with opportunities to expand and grow. So we are working in these areas, which starts with recognition, highlighting, and educating and followed by hand-holding as well.

There was a need to establish a strong voice of entrepreneurs and a platform that can highlight MSME-specific success stories and connect them with opportunities to expand and grow.

Question 3. What were the challenges faced by you as an entrepreneur and how did you overcome them?

Faiz Askari: As with any other bootstrapped project this project also faced issues. working with limited resources and producing the best possible results was the main priority as well as the challenge.

Question 4. Is there a link between SME & Startups? If, yes please give your viewpoints.

Faiz Askari: Yes, in my opinion, Startups are a form of micro-businesses. There are a lot of similarities between micro-businesses and startups. In the case of startups, we may find the majority from non-business backgrounds individuals turning into startups whereas. Secondly, startups have become a more trendy term and a buzzword these days. Whereas SMEs are small-sized businesses they could be in business for over decades.

Secondly, startups have become a more trendy term and a buzzword these days. Whereas SMEs are small-sized businesses and they could be in business for over decades.

Question 5. How do you see the Indian startup and SME industry in the next 5 years?

Faiz Askari: Indian startup and SME sectors are extremely vibrant. Giving 5 year’s prediction is not so difficult because huge action is happening in this segment. based on the last decade, we can surely predict that in the next five years India will produce globally acclaimed startups. The role of SMEs in the Indian economy will become even stronger and their contribution to the world’s leading economy will become substantial.

Govt’s focus is also well-defined and targeted. They are strongly working on achieving the 5 trillion Dollar Economy mark and in this target contribution of MSMEs will be vital. Secondly, Govt is also working on bringing MSMEs’ contribution in GDP to 40% as compared to the present-day contribution of close to 30% in GDP. Such goal settings will certainly escalate the level of MSMEs in India.

Question 6. What is advice would you like to give to aspiring entrepreneurs?

Faiz Askari: Entrepreneurs are motivated, people. All they need is a bit of guidance and persuasion. my advice to them is to sustain their motivation and they should remain dedicated to their goals. The goal settings should be smaller in size and their goal settings should have milestones that they measure from time to time.

Akram Turak is a contributor based out of Nagpur, India. He is also the creative director of TMA Worldwide, the parent company of GCCStartup.News, Startup Berita & Halal Biz News